About a year ago, the Boon Rueang Wetland Forest Conservation Group started a wildlife survey in the 483 hectare community forest in northern Thailand. “We recorded leopards, otters and other animals,” says Songpol Chanruang, president of the group.

Although about 130 kilometers long, the Ing River that feeds the Boon Rueang wetlands is the second most important habitat for the Eurasian otter in Thailand, according to the Living River Association, an NGO that promotes community conservation in the basin. of the Mekong. The Eurasian otter – a species listed globally as Near Threatened by the International Union for Conservation of Nature – occurs in at least 10 sites along the banks of the lower Ing River.

The Ing River is a tributary of the Mekong. The stretch where the Ing and other similar tributaries in northern Thailand empty into the Mekong are sandwiched between a large number of dams. There are 11 hydroelectric dams upstream on the Chinese section of the Upper Mekong – known as the Lancang – and 11 more in various stages of planning and completion on the Lower Mekong in Laos and Cambodia, most with some level of Chinese involvement in development or construction. The effects of upstream dams on the ecology of downstream tributaries are largely unknown.

Major dams along the Mekong River, including those under construction or planning (Graphic: The third pole)

“The seasonal cycle has changed over the years, and this has been noticed after the dams were built… especially in the past 10 years,” says Chanruang. “The Mekong hardly flows into the Ing River, or if it overflows, it no longer lasts a few months, but a week, or even a few days. “

“We just hope [the otters] can adapt to the changing environment by using their wild instincts to find a safe place to breed and feed, ”Chanruang said, stressing the need for more study and public engagement.

The Mekong floods during the rainy season between June and October, filling the Ing and other tributaries. This soaks the humid forests of northern Thailand.

The natural flooding of the Mekong River provides this region of Thailand with water, fish and nutrients to support the forests and wetlands of the Ing River. The nursery this creates supports both wildlife, such as otters, and communities downstream.

But over the past decade, a series of dam projects on the mainstream of the Mekong have resulted in an unusually high intensity and speed of the flooding process.

“The water now comes and goes quickly, no longer lingering in the forest as in the past,” says Chanruang, describing the seasonal flooding of the Ing River. “It’s clear that [water levels] have declined considerably during the rainy season in recent years. Its color has also changed from muddy water to clear water.

What does the color of the Mekong reveal about his health?

The clear, bluish water, which has been observed even on the mainstream of the Mekong in recent years, signals a lack of suspended sediment. This material and the nutrients it contains are essential for all life on the Mekong River and its tributaries.

The northernmost monitoring station in the Lower Mekong Basin is in the Chiang Saen district of Thailand, just upstream of the Ing River. The quantities of sediment recorded here fell from 85 million tonnes per year (MT / year) in 2001 to only 10.8 MT / year. Only 16% of the sediments deposited in the lower Mekong basin now come from China, compared to 55% historically.

“There are around 26 rainforests left in the Lower Ing that are managed by local communities,” says Teerapong Pomun of the Living River Association, adding that the ripple effects of these man-made water levels on local people include the changes in fish populations, falling incomes and erosion of banks.

Although there is little data available on the overall biodiversity of Ing, the State of the basin report 2018 from the Mekong River Commission (MRC) showed a decline in fish catches along the river. In neighboring Luang Prabang province in Laos, the gillnet catch rate fell by 17% between 2008 and 2013.

No more dams, no more disturbed ecosystems along the Mekong

Other dams are planned or under construction. The Pak Beng Main Hydroelectric Dam project, a project in Laos funded by China Datang Corporation and the government of Laos, will be constructed just 80 kilometers from the mouth of the Ing. Preliminary construction of the Luang Prabang dam, the next main hydropower project closest to the Mekong, has reportedly already started in Laos.

More dams are planned or are under construction near wetlands in northern Thailand (Graphic: The third pole)

“All [further] changes in the Mekong River will certainly affect tributaries of the river and adjacent wetlands, ”said Pianporn Deetes, communications director for Southeast Asia at the NGO International Rivers. She adds that the Mekong is a complex system in which different ecosystems are connected. “As the river is dammed upstream, the entire ecosystem is cut and disturbed. “

So far, throughout the 2021 rainy season, there have been drastic changes in water levels in the Lower Mekong Basin, due to a combination of low rainfall and upstream hydroelectric operations. in China. Since July, there have been dozens of lockage events and heavy falls over 50cm at a time, according to data from the Mekong Dam Monitor, a public online monitoring platform that measures climate issues. using satellite images, GIS analyzes and remote sensing.

Hydroelectric dams meet higher energy demands during the day. At night, the turbines are turned off and the release of water is restricted, resulting in the lock – the rapid rise and fall of a river’s water level. These create difficulties for fish that navigate the river and nesting birds on the beaches.

“Water levels and flows are supposed to be high [now], up to 6-7 meters, but we can only see a few meters in this rainy season, ”says Deetes. She adds that the villagers of Boon Rueang are fighting to protect their forest: “They are conserving it, creating conservation areas and the like, but given the scale of the problem, that would mean next to nothing.

Beyond Ing and Boon Rueang, the Ruak River winds through flat grasslands and agricultural areas, marking the border between Thailand and Myanmar until the Ruak meets the Mekong and Laos, in the so-called “Golden Triangle”.

This year, as Thailand entered the heart of the rainy season, several organizations and experts claim that hydroelectric operations upstream on the Mekong have caused low levels on the Ruak, with sandbars normally visible only during the dry season appearing in July – an unpredictable water glimpse. levels of the rainy season 2021. (Experts in China contestation this connection.) 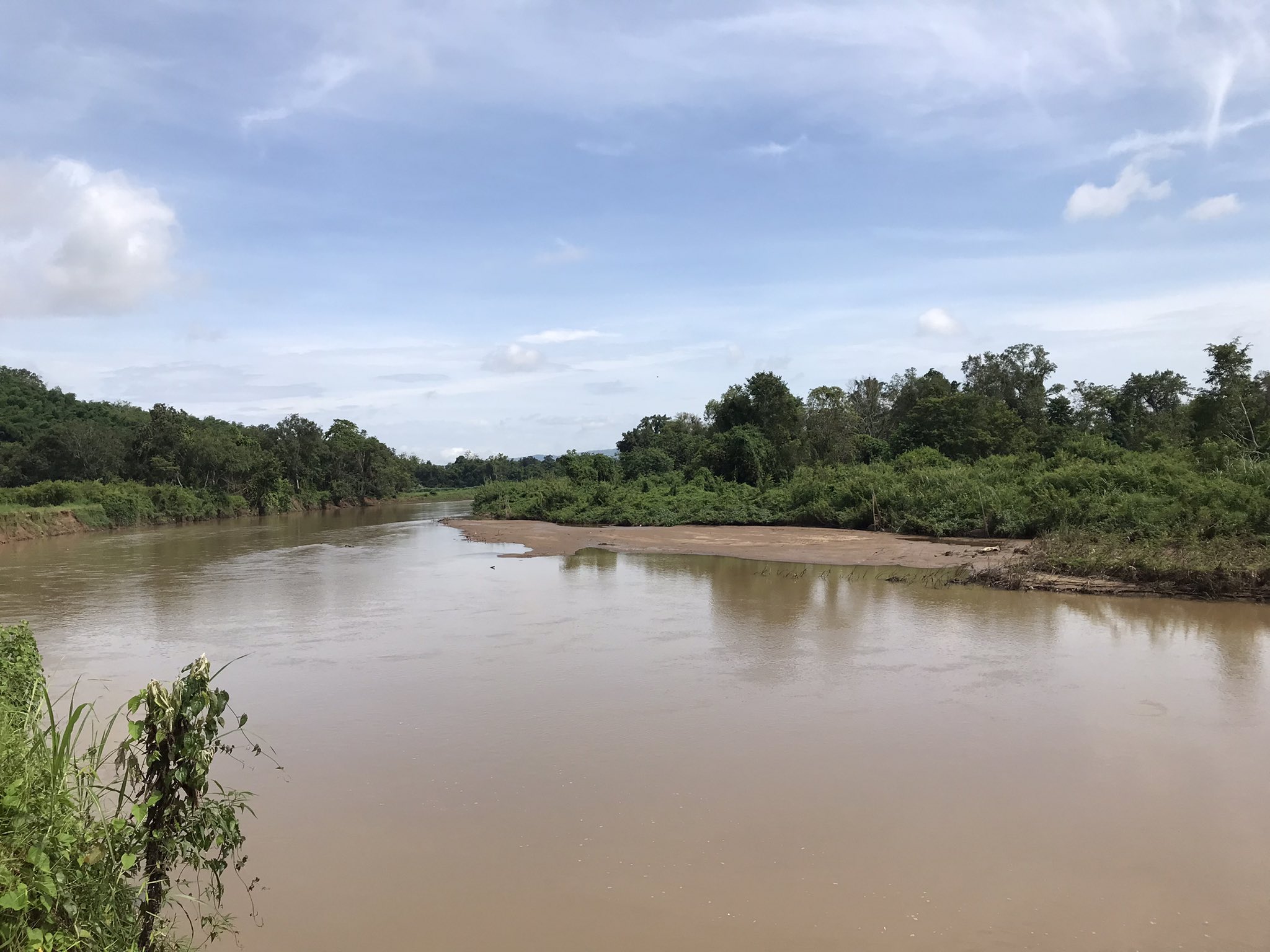 A photograph taken on July 15, 2021 of the Ruak River. Sandbanks that are normally only visible during the dry season are visible here, during the wet season. Unnatural changes in water levels have huge implications for Thailand’s riparian wildlife. (Photo: John Roberts)

Just 500 meters north of where the Ruak meets the Mekong are the grasslands of the Golden Triangle Foundation for the Asian Elephant (GTAEF), which works with around 20 rescue elephants.

“The biggest ecological effect we’ve seen [since the largest dams came online] is the loss of breeding and spawning grounds for fish and wild birds that have lost a [place], protected from predators and hunting, a place to raise young or grow, ”says John Roberts of GTAEF. Roberts says that during his first 10 years in Thailand (2003-2013), the river was flooded so predictably between June and October that the foundation planned its management of elephants around the flooding, but that’s no longer possible.

The fertile area where the Ruak meets the Mekong was once home to birds such as the gray-throated swallow, a species of swallow that nests on the banks of rivers and is now rarely seen in the zone. Many species of birds, like the Lesser Pratincole, lay their eggs in sandbanks along the Mekong River and its tributaries, and are now at risk of losing their nests to unnatural flooding.

The fact that from top to bottom prairie habitat areas, all of our local tributaries have been cleared for monoculture agriculture, primarily maize, [which were] previously unsustainable due to annual flooding… The ecosystem balance will change and different species will be supported.

Due to both Covid-19 and the unrest in Myanmar following the military coup, cross-border cooperation on conservation issues has become even more difficult in recent years. The main cross-border governance body for Mekong water resources is the Mekong River Commission, but it is purely advisory and cannot prevent the construction of new infrastructure projects.

“It still really depends on investors or developers [of dams] to fix the problem and fix it, ”Deetes explains. “They need to understand the nature of the river, its system and the impacts it can cause.”

After years of negotiations and cross-border campaigns, recent developments have led to the sharing of precise and near real-time data from Mekong hydrological stations. Through the Lancang Mekong Cooperation Framework (LMC), China has cooperated more closely with the MRC on water levels. However, the effects on tributaries of an unnatural flood impulse are even less well understood than on the main course. The largest dams on the Mekong Mainstream are in China, and although river levels are reported via the LMC, China shares scattered operating data on the dams with those downstream.

“The point is that the dams are far away, but their impacts are there and real,” Chanruang explains. “We are always concerned about them, but we can never reach them and deal directly with them. “